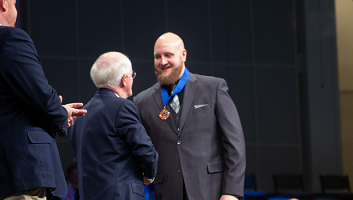 After being recruited by over 30 colleges, my football career at Davidson College ended as quickly as it had begun. It was over after a third knee surgery from which I never fully recovered. That was followed by a fourth operation in an attempt to fix the damage…

I had grown up in a Christian home. My dad was a pastor and my parents had even named me Andrew, after the Apostle Peter’s brother. Andrew was a man who told others about Jesus – this was the aspiration my parents had for me (John 1:40-41). I am thankful for being surrounded by Christian conversations and teachings at a young age, however, it felt more like forced religious obligations than living by faith, which was detrimental to my spiritual life. Nobody noticed since I did the right things in church and excelled in school and particularly football.

“One of the two which heard John speak and followed him was Andrew, Simon Peter’s brother. He first findeth his own brother Simon, and saith unto him, we have found the Messiah, which is, being interpreted, the Christ.”

Now, back to college – at 21, tired of the constant pain I was enduring from knee surgeries, I went to a pain specialist who prescribed me 180 “Roxy 30’s” a month. That is an incredible amount, similar to what would be given to a terminal cancer patient.  I soon became physically dependent to it. My doctor was sent to prison for knowingly over prescribing opioids. Now without a prescription, I turned to the streets for any opiate I could find.

After some time like this, with the help of my family I quit for a while, earned a certification in carpentry, met a girl, and shortly following graduation became employed and got married. Our first pregnancy resulted in a devastating miscarriage. She was able to get pregnant again with our son, but still our marriage soon fell apart. When we split up, I went off the deep end with drugs and crime. I was arrested, but after a few months was released and returned to a destructive lifestyle. This resulted in a crime spree and culminated in my arrest at the age of 25.

I was immediately sent to eight months in an isolated cell. Here, I started reading my Bible again. The Lord got my attention when I read Hebrews 12:6, “The Lord disciplines the one he loves, and chastises every son whom he receives.” I was encouraged that God still loved me and this was His discipline to bring me back to Him.

After being allowed into the population at the jail, I heard about the RU Addiction Program. Here I met Corbett Stone and volunteers from Florence Baptist Temple. God used RU to grow me spiritually as I participated and worked through the challenges each week.

On December 1, 2021, I maxed out my sentence and was released from the correctional institution. Two days later, I attended the Friday night RU program at FBT, the following day I came back for the Saturday Christmas program, and was in church that Sunday morning. I restarted the RU program and have completed the curriculum.

God has constantly been drawing me closer to himself and has been restoring my life in many ways. He has blessed me with a job, restored my driver’s license, and made it possible for me to buy a car and rent a house. Nine months ago, I was in a prison cell and now, by the grace and power of God my life is completely different. I have the privilege of serving God as a group helper in RU and pointing others towards Jesus and all the amazing things He does when we submit our life to Him and live out His will instead of our own.

How can we pray for you or celebrate with you this season?